Once you reach the capital, you will be invited to a guided tour of the city centre. Your guide will introduce you to Ljubljana’s rich history. As the central city of Slovenia, it has always been of great importance, strategically located, it had an important role even in Roman times. Developed and grown up by the Ljubljana River, the city quickly became the central point around which smaller villages spread out. Even today, it has maintained its political and economic importance. Throughout its history Ljubljana has undergone many transformations, but each era is still present in the main view of the city. After the tour you will have free time to explore many streets and small shops and buy souvenirs for your family and friends.

The first thing you need to know about Ljubljana is how to pronounce it: Lee-yoob-lee-yana. That’s how Slovene people are pronouncing the name of their capital. Okay, now that we’ve got that out of the way, let’s talk about everything else this Slovenian capital city has to offer.
True to its historical significance, the Old Town center of Ljubljana remains intact despite two major earthquakes over the past 500 years. The rebuilding process did however create a unique blend of architectural works, as evidenced by the varied styles of the St. Nicholas Cathedral, St. Peter’s Church, The Triple Bridge and The Dragon Bridge and many more places for you to learn about!

If you prefer a more cultural visit, you can take the Ljubljana Castle (13,00 euors) funicular or simply enjoy a nice walk up the hill for a tea break. After your free time, you will be picked up at the same point in the city and walk with your guide to the bus station. 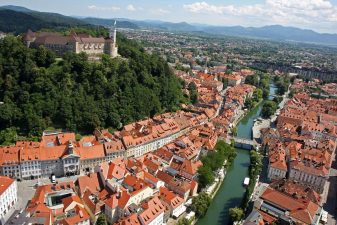 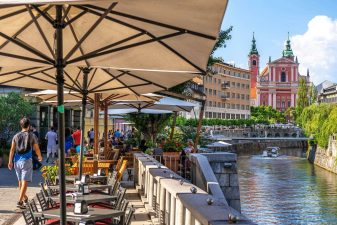 During the stay in Ljubljana, if time permits, you can enjoy a nice river cruise (10,00 euros) along the Ljubljanica river.
If you are in the mood for people watching, you can seat alongside the riverbanks and enjoy your day while observing the local life happening around you.

Not to be missed is a stroll along the Open Air Market, where you can see all the fresh produce form the nearby farms. A popular stand among locals are the once offering the sauer cabbage, local vegetables and the famous milk machine from which you can pure 1 liter of fresh milk. Hidden in the alley is the flower street, where several small florists offer the flowers. a beautiful picturesque site not to be missed for great photos. 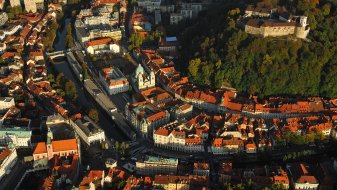